Enjoy the many beautiful landscaped outdoor
spaces throughout our district 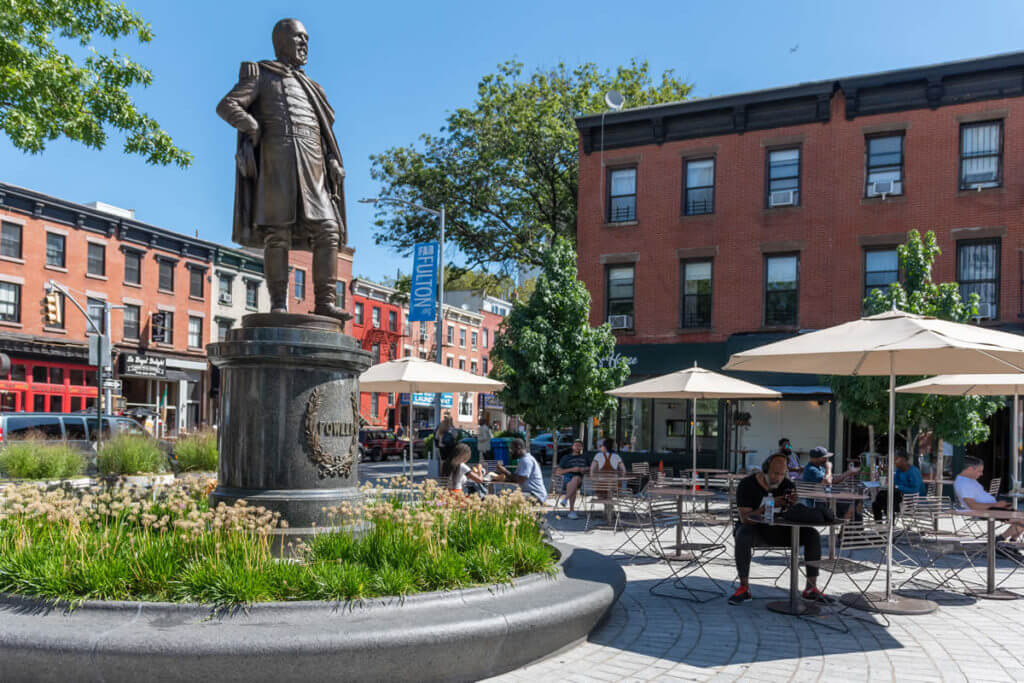 The triangle-shaped traffic island known as Fowler Square was redesigned as a public plaza and reopened in 2018. With support of area businesses and institutions, Community Board 2, elected officials, historians, and activists responsible for saving the statue of General Fowler, FAB FULTON was awarded the project as part of the New York City DOT Plaza Program. An inviting open space with patio tables and shade umbrellas located at the nexus of a busy intersection linking Downtown Brooklyn to Fort Greene, Fowler Square is a popular space to meet up, take lunch and people watch. 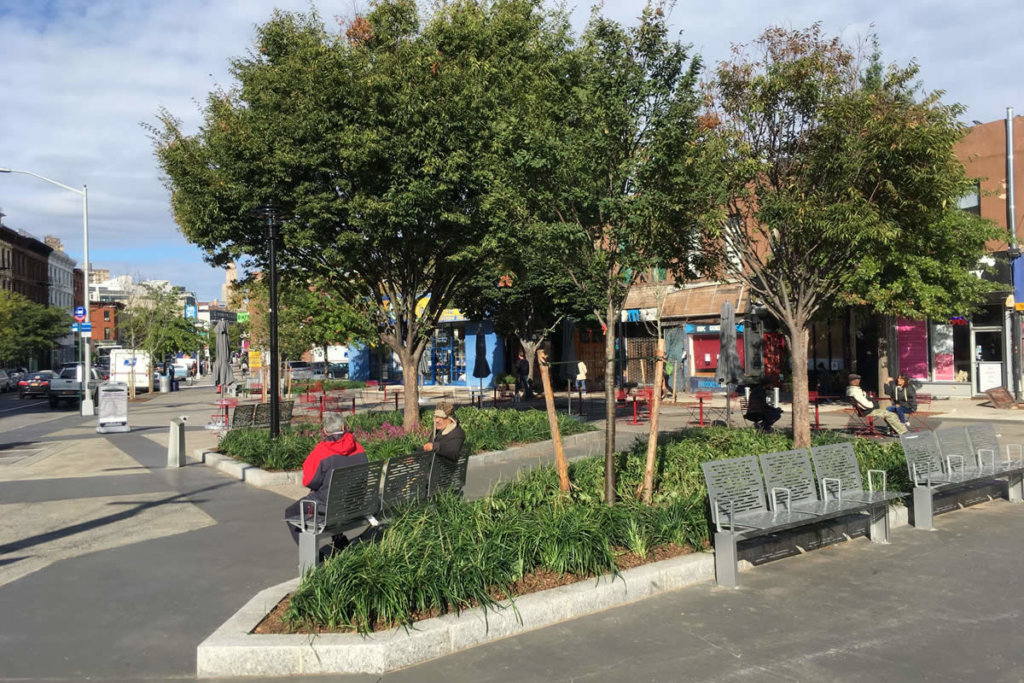 An initiative to transform this vast area of concrete into a new community open space, the Putnam Triangle Plaza in Clinton Hill had the support of community leaders, the surrounding businesses, residents, institutions, elected officials and received unanimous votes of support by Community Board 2 when initial discussions in the community began in June 2010. After a NYC DOT study and review period, as well as community workshops, the plaza launched with temporary materials in fall 2011. Permanent design and reconstruction was completed in 2019, and the new plaza space reopened to the public, complete with plentiful new seating including shade umbrellas, improved lighting, new trees, a water fountain, and green landscaping. 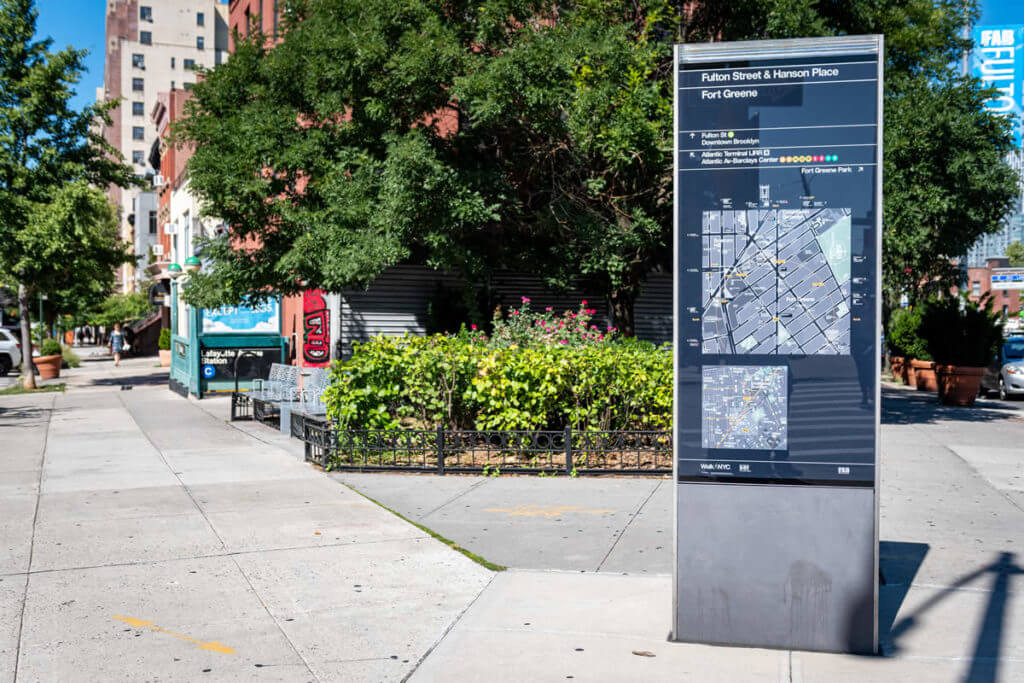 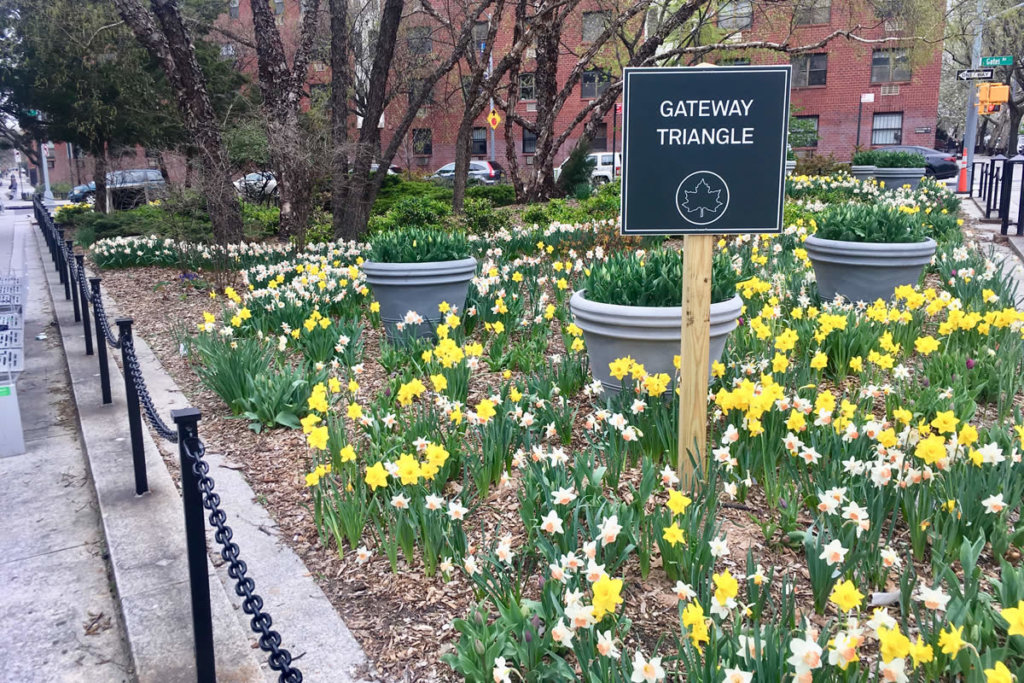 The NYC Department of Transportation made several pedestrian safety improvements and an enhanced public space at Fulton Street and Gates Avenue. New planted areas, more trees, benches and additional lighting were installed for this project made possible with funding secured by the FAB FULTON. Additionally, the NYC Department of Parks & Recreation removed the 8-foot-tall gate that once surrounded Gateway Triangle for decades and opened up that space, replete with seasonal flowers and plants for the community to enjoy. 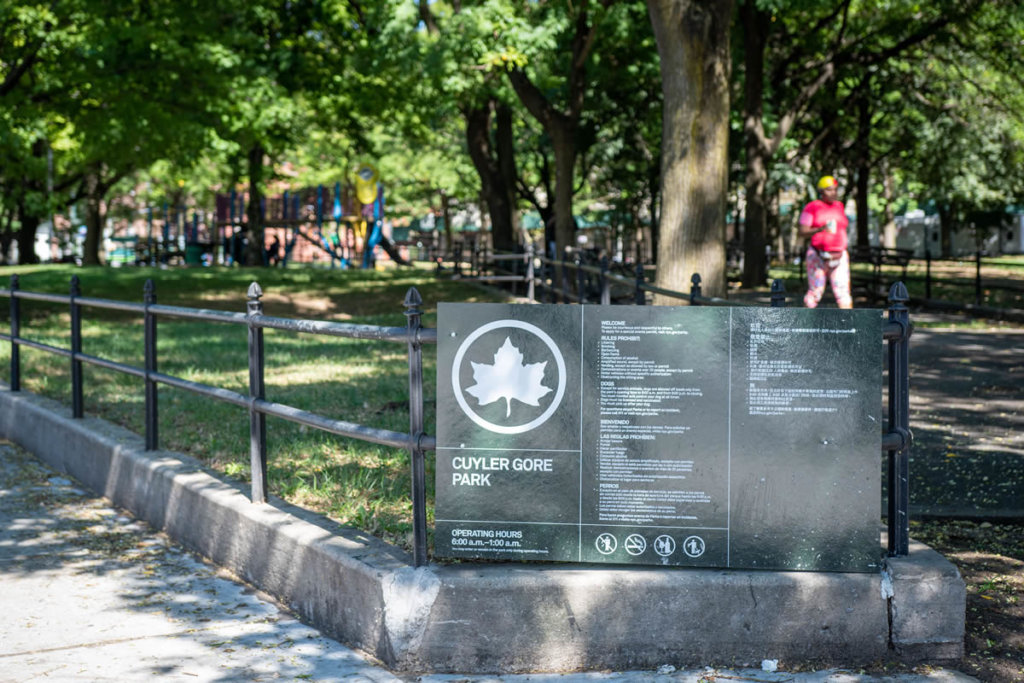 One of the oldest parks in the city, the park was named for a prominent local Presbyterian minister, Dr. Theodore L. Cuyler prior to 1901. Expanded and renovated twice in the 1980s, this park was redesigned to include more greenery, seating and brick paths; the popular water sprinkler feature and children’s play area attract families from the neighborhood year round. The park remains free of monuments but full of trees and flowers, just as Dr. Cuyler instructed so many years ago. Still, FAB Fulton continues to advocate for improvements needed to fix drainage problems and make the playground safer. 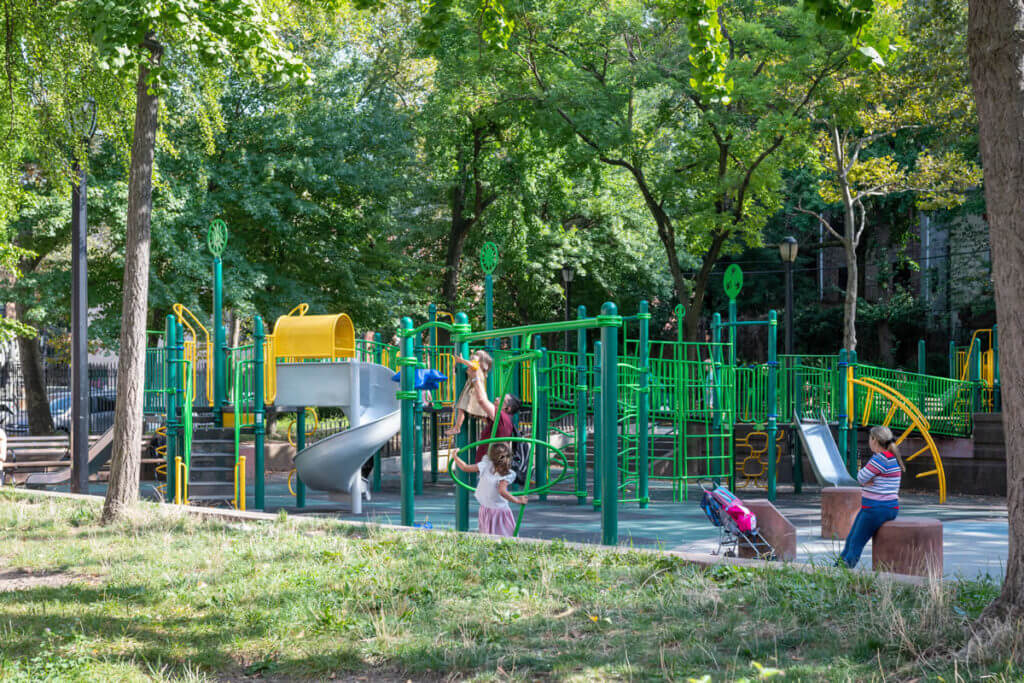 Named for Crispus Attucks, an African American killed in the Boston Massacre on March 5, 1770, this playground was opened by NYC Parks in 1934. Over the years, the playground continued to receive care from volunteer neighborhood groups working with NYC Parks, and then it was completely renovated and reopened in 2016. A $2.5 million project included new play equipment and safety surface, new restrooms, new sports courts, improved landscaping and safety lighting. In 2017, the basketball courts were renamed in honor of the late rapper Christopher “Biggie” Wallace, who grew up a few blocks from the playground. 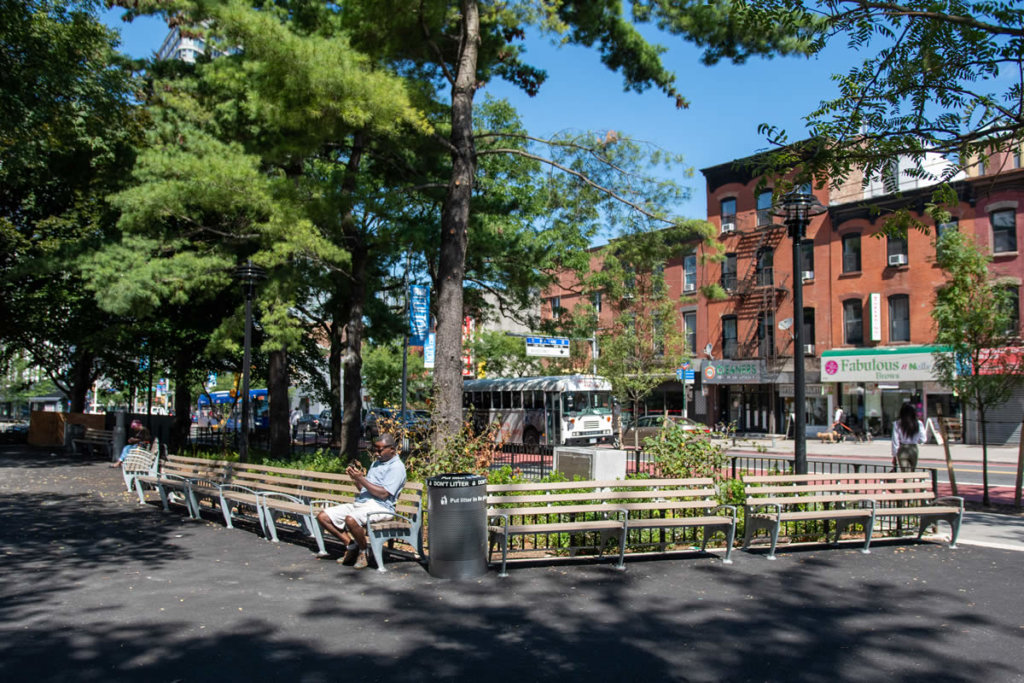 Formerly known as “BAM Park” due to its proximity to the historic cultural institution and closed for years due to safety issues, the fenced-in triangle space opposite Fowler Square in Fort Greene was rebuilt and opened up as a new park in 2019 to be managed and maintained by the NYC Department of Parks & Recreation. In August 2019 it was officially renamed Betty Carter Park for the renowned African-American jazz artist who once took cello lessons in this same park and called the neighborhood her home for years. 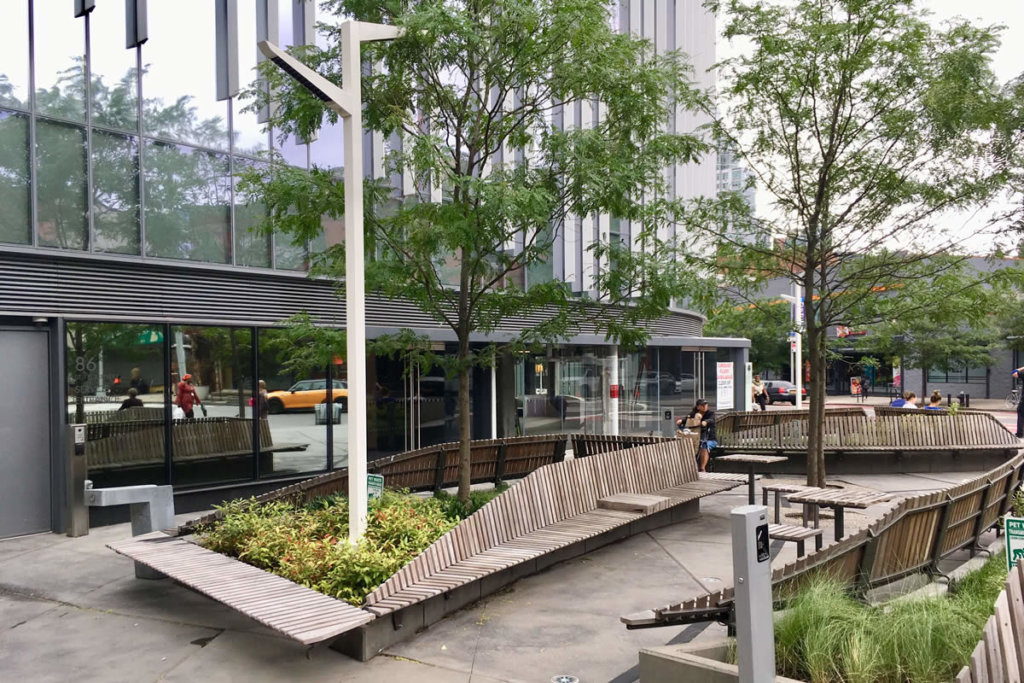 A NYC zoning regulation aimed at ensuring dense areas have a measure of open space, privately owned public spaces, also known by the acronym POPS, are spaces dedicated to public use and enjoyment and which are owned and maintained by private property owners. There are more than 550 POPS in the City, and there are two sizeable spaces in the FAB FULTON area. Both POPS areas on Fulton Street in Fort Greene provide seating, lighting and shade for the enjoyment of locals and visitors alike.